Il progetto “1.1.3.stella!”, was born out of a meeting between a painter and a writer. During the countless sessions and talking, a text was constructed that came out of a sort of oral tradition of action and dialogues. This led to a book, a theatrical act, a video and in this case a video installation.

In the beginning, there was an oral tradition, passing down stories by word of mouth. Let us ask ourselves, what is the book?
A fetish object.
An object of narcissistic satisfaction.
A consumable object.
A traditional object
An object for translation.
A mysterious object
An unfailing object.

“113 Stella” is the story of an encounter, the mystery of the encounter. A meeting between signs and symbols. The pictorial and the calligraphic. A painter and a writer who tell a story, no, two authors who tell a story, no, that’s still not it. Two narrators passed down a contemporaneousness. A game of references a game of images. A narrator tells the other narrator: “You know when one stands for …”, or the tradition of contemporaneity. The image refers to the sign in the game of translations. This is the oral story. The sign refers to the image, and the game continues. The sign, be it pictorial or calligraphic, revolves around a mystery’s unfathomability. Two people meet and a narration ensues, images, words, words, images. In the middle, there is the cut.

The experience becomes image-word, word-image, and a tradition is born. Two people decide to codify their oral tradition, their story and they derive different objects and many translations. A book, several pictorial canvases, a video, new encounters, new narratives and objects, and so on; But, at the base is in the oral tradition carried out by two narrators who tell a contemporary story.

The last question is about the narrator, who is the narrator ? Who handed down the oral tradition? Who translates the word-image?

In this case, the audience is invited to read passages from the book and, with their own voice, give life to this vision. The attempt is to be able to return a body to both the text and the image through the audience’s voice.

In concrete terms, two modules will be mounted, one of which will be full of image sources and the other, empty, and will be the receiving screen of the image. The video projected on to the screen is the recording of a theatrical adaptation interpreted by the actress Manuela Bolco. The video will be projected without sound to give space to the microphone, which is turned on and will postpone both the atmospheric noise and the voice of those who intend to enter this oral tradition. 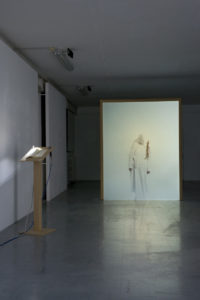 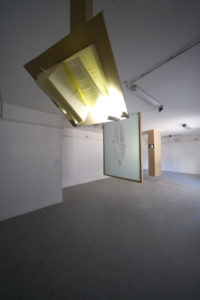 Two artists write. No, on the contrary, two artists write about eachother. The sense is gathered around the reflective. Because they write about another, but in a certain sense they write about themselves, describe themselves and narrate themselves, as their shared writing takes shape. Because, in fact, we are talking about bodies. Bodies that take shape through the infallibility of the word. Therefore a paradox, therefore, because there is nothing fallible about the word; fallible in the etymological sense of deceiving, inducing error. Or not. The word does not deceive, it is absolute, crystalline, pure. The opacity, the polysemicity, the dust that the writer applies and above all it resides in the pact that he -or they stipulate with the reader.
Giulio De Martin and Nicola Rotiroti work exactly on these coordinates, on the body of the word, on the possibility of cloying that body of emotion, memory, impression, pain, joy, weight. To bear such a load, words must walk towards those who listen to them, read them and, above all, look at them.
In Japanese the art of writing is called shodō, that is “way of writing” because what appears as the simple gesture of writing must be constructed as, on the one hand, a path towards the expression of moods, feelings, refinement of their sensitivity, and on the other towards a collaboration and the establishment of proper relationships. Here, this idea of writing as an itinerary, that is, a movement that has a purpose and that purpose is the Other and the search for a possible good relationship, fits very well with the project 1.1.3. Stella. We quote the shodō, because in the path that is inscribed in the ideograms that make up the word the commitment of the gesture is also contained shaping that path in an aesthetically perceptible way.
In the construction of the De Martin and Rotiroti’s text the part of visibility is fundamental to the point of having to split the image they propose, to cut the space that welcomes it. The authors are committed to giving weight not to their writing, but to the story they tell, they separate the word from the story, to displace, almost to test those who must accept their seemingly aerial words, and transform them, reading them, into history, charge , heavy, that is, in the figurative. But it is not a stratagem, it is the search for a unity of narration. It is the long, thoughtful, meditated transformation of an intimate writing in a collective gesture. It is the invitation to inhabit all their writing and to change the story, as is natural when one enters a reality already mentioned, drawn, but not finished.

How many gestures seem to ask the two authors of 1.1.3. Stella! Looking at writing, realizing that it has taken shape -or it has entered a body-, modifying it, reading it, grasping it, returning it. This great deal is reminiscent of Calvino: at the beginning of the novel if, on a winter’s night, a traveller, the narrator claims that he can read «sitting, lying down, curled up, lying down. Lying on their back, on their side, on their stomach […] also standing upside down, in a yoga position. With the book upside down, it is understood. Of course the ideal position to read cannot be found “.

Reading is first of all physical, and a bodily activity is discussed in terms of muscular commitment, continuous involvement of the senses, let’s say it: fatigue. But because reading something means understanding something and reading is synonymous with awareness, knowledge, and the recognition of the signs through which the real-world addresses people. But in this case the “real world” is complicated by the fact that it is offered in second place, read, written and interpreted by two artists, by the Duo, who in the meantime have read each other. You would leave with the feeling of having gone into a maze, but my job is to hold you back, because instead you are faced with a beautiful act of freedom and attribution of a leading role to each of us who will stand before the lectern .

While the sinuosity of the words they chose to narrate remains cloaked and silenced by them, De Martin and Rotiroti ask us to soften the buzz of the world to become a narrator of their world, to “give it a voice”, but ask that this gesture of trust is not casual, anywhere in space; the effort to read not the world, but a world, needs the visibility of the perspective from which it will be read so that it is a gesture of mutual and very human respect. «… The text you write must give me the proof you want me. This proof exists: it is writing. The writing is this: the science of the enjoyment of language, its kamasutra (and of this science there is only one treatise: writing itself) … »writes Roland Barthes in Pleasure of the text. Visible respect, mutual enjoyment: the two levels of a place, not so metaphorical, where 1.1.3. Stella arises. After studying literature, Giulio De Martin dedicated several years to the studying psychoanalysis and writing. After having published some articles and presenting at a number of seminars and conferences (again in the field of psychoanalysys), he published his first book “Transito nell’incbrunire”. He consolidated his passion for study and writing over the years, writing of another book (unpublished), his latest book was “113 Stella”, is in print.

Today, at the age of 47, it is not always easy to count the lives lived and the work done, due to his terrible memory, but there is always the desire to meet, exchange ideas and definitely to experiment.