It's two-o’clock, just after lunch, I am looking over some of the pieces for my personal exhibition entitled “Lo Re (the King)”. It is being curated by Paolo Aita. I am talking to him, trying to shed some light on the path my painting has taken.

For years I have been painting hyper-realistic bodies under water. With over three-hundred pictures, it has been both obsessive and disturbing. After this I came out of the water and entered in to an apnoea inside the womb of baroque churches: liquefying them, distorting them, breaking them.

Anger, so much anger steeped in gold leaf and painting knives of colour and oil.

Me: Paolo, I think that figurative painting is caging me. This type of representation doesn’t give me inspiration any longer, it suffocates me.

Paolo: Promise me that you won’t give up the figurative work. Try to live within its confines, always live it.

He takes a piece of paper and writes something on it. He asks for a jar with a lid. We seal it with some paper masking-tape writing the date on it and signing it.

Paolo: The title of your next exhibition is written inside this jar.

I open the jar and read what he had written: Ghost Sonata

I close my eyes and the darkness arrives, and time passes.
Figurative and Abstract
Conceptual and Narrative
Bread and Water
Psychological and Spiritual
Quality and Quantity
Time and Space
Cain and Abel
Shamanism and Sorcery
Visible and Invisible
Knowledge and Ignorance
Love and Hate
Old and New
Modern and Contemporary
Chronological and Acronistism
End and Beginning
Near and Far
Dreams and Imagination
Me and the other
Meat of Fish

I have become a frog. When I am out of the water, a have water vision, I see watery landscapes, I distinguish shapes, I perceive time through leaps. The colours are bright and acidic; if you touch me I am poisonous. I have markings on my back, inside I have bones. What I see is my body, inhabited by a history of other bodies. Everything that surrounds me can easily scratch me and it nourishes me. Now I am still. Now I jump. Now I breathe. Now I suffocate.

I have markings on my back, inside I have bones. What I see is my body, inhabited by a history of other bodies.

Everything that surrounds me can easily scratch me and it nourishes me.

Now I open my eyes, but I do not see a circle, I see a line.

A hommage to Paolo Aita

When I learned how the title of this exhibition came about, I cannot deny that I was moved. That conversation with Paolo Aita which Nicola Rotiroti tells us about today , it seemed to me to be a surprising premonition. That gesture, to write the title of a friends next exhibition on a piece of paper and to immediately close it in a jar as “a future memory” is like something from the past, full of poetry, it’s something quite rare. Then, after a few weeks, Paolo Aita suddenly and inexplicably leaves us. That life which Carmelo Bene defines as the genial as the precursor “to die a death”

On that piece of paper, he’d written “Ghost Sonata”. Paolo’s wishes had to be respected. And today we inaugurate the exhibition bearing his title, which unfortunately he is not with us to witness. And I am convinced that, he would have willingly and accurately written about this exhibition, as he was so expert at. On the contrary, as I write these notes I feel a double responsibility: the first is to correspond about the very high quality of these seven great mixed techniques on canvas, and the second is to live up to the intuition that touches on the foresight he’d had to predict such a creative breakthrough for Nicola Rotiroti.

“Ghost Sonata” is the title of a drama by the Swedish playwright August Strindberg (1907) but is also an album by the San Francisco group, Tuxedomoon, published in 1991. Given the skills of Paolo Aita and his sensitivity as a scholar and as a musicologist too, I am unsure which of the two works he was inspired by when this title came to mind. Perhaps it was worded, simply words, that influenced him. What is certain is that the “Sonata of Spectres ” is the most effective of the possible titles for the exhibition that we inaugurate today.

Spectrum, in Latin, means “vision” and derives from specere that means “to look”. And, literally, what the author proposes today is a new way to see his painting. The choice to close this cycle that we titled Painters, painters with an exhibition that investigates painting through painting could not have been better. The latter, when it is authentic, is always and in any case a “question of life or death” and not a simple discipline, regardless of how refined and complex.

I will state now that the impression we get when looking at all the works Nicola Rotiroti is exhibiting today, is that in which painting is used as a means and an end, a journey made with a determination that Emilio Villa would have defined “ulissic”, in fact definitive, without half measures, as happens with those who put into play everything for everything, putting the past behind them.

Faced with the challenge in which Kantian painting cannot but be considered, like man, as an end, makes the ironies of those who consider it a thing overcome by technology or, in any case, from the way marketing today has transformed art into an activity like any other, destined solely to move money and promote wealth accumulation.

The visual viewpoint (the spectrum in fact) that is revealed to us today is impressive because it speaks a language of seven inner landscapes, born from a passionate and almost violent creative force that only a deep restlessness could evoke. That disquiet is the fuel of the this author’s. It is a fragility that dialectically transforms into force, epic and metamorphic in strength.

“I have become a frog. When I am out of the water, a have water vision, I see watery landscapes, I distinguish shapes, I perceive time through leaps. The colours are bright and acidic; if you touch me I am poisonous. I have markings on my back, inside I have bones. What I see is my body, inhabited by a history of other bodies. Everything that surrounds me can easily scratch me and it nourishes me. Now I am still. Now I jump. Now I breathe. Now I suffocate.”

These are the words of the author, who when painting, transforms into something other than himself. He interacts with the lives of others, mixing suffering and creative excitement, determined calm and the anguish of death. This mixture of opposites that someone has called dialectic, feeds on the history and art that is a constitutive part and motor. On the seven canvases the dense intrigue of lines and colours does not abandon figuration but, nevertheless, distorts it. It produces suggestions that bring the mind back to the graphospasms of the American Abstract Expressionism, to the European Informal, to the anarchic fury of the Gutai group and, even, to certain post-impressionistic atmospheres. Once again: the reflection of painting on painting.

What is striking is the life of a new pictorial world in the experience of this happily visionary artist, who celebrates his craft while telling us the eternal story of a man in search of a balance between his own anguish and the events of which he is a protagonist. Forced as he is to stay in the whirlpool of history. Because only in this whirlpool is he given to be a painter, and if he wants to continue to be a painter. 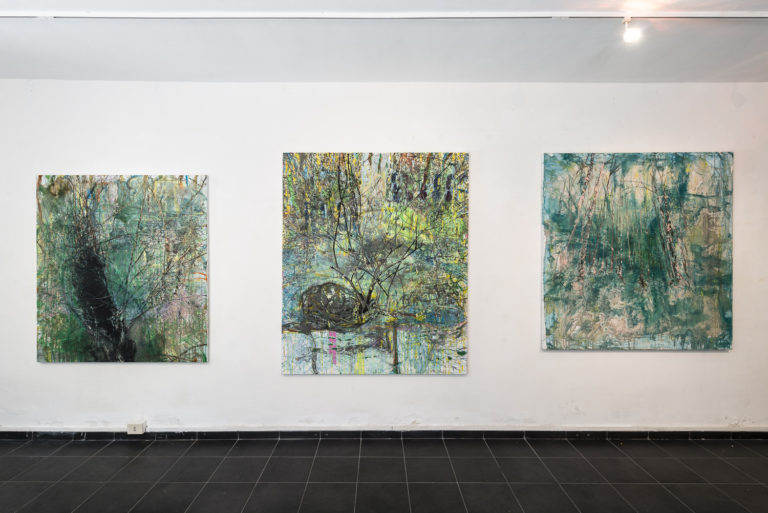 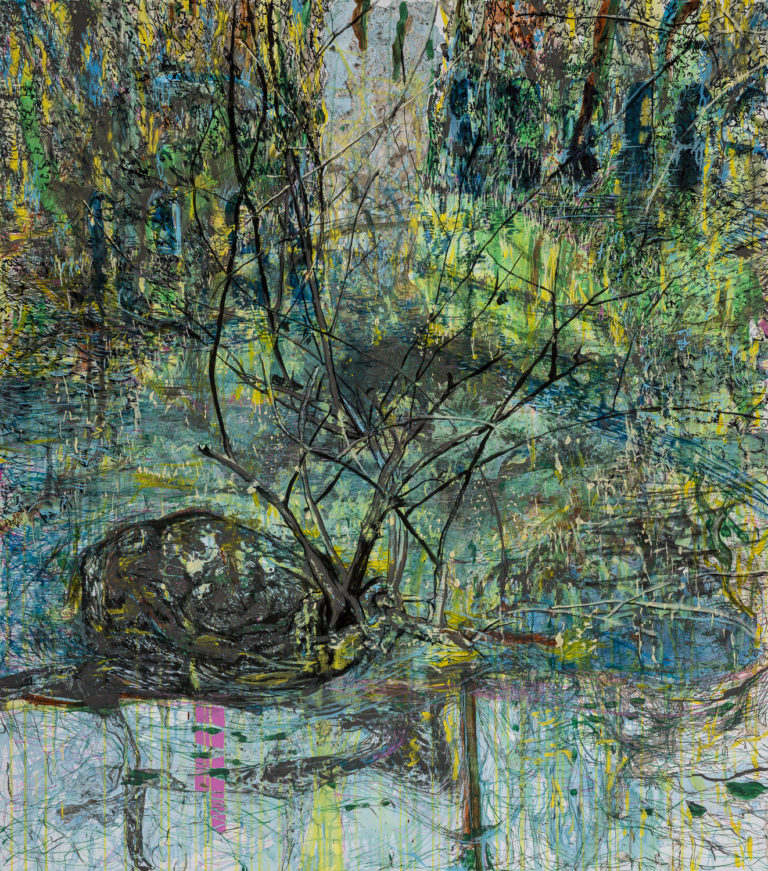 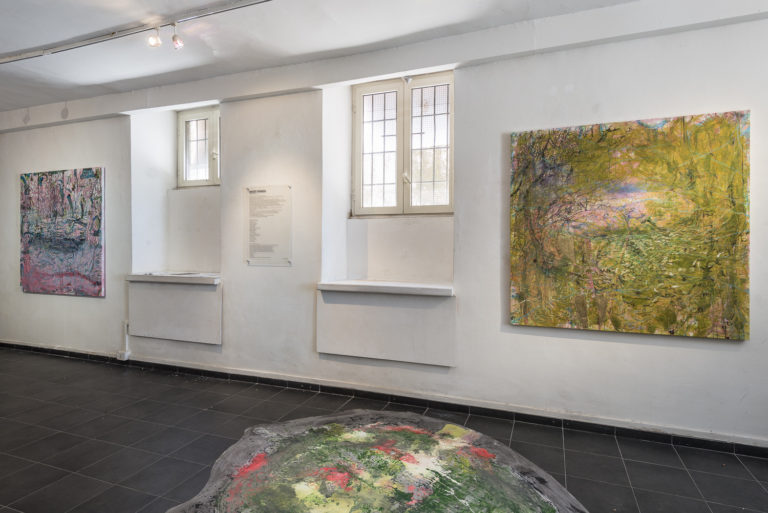 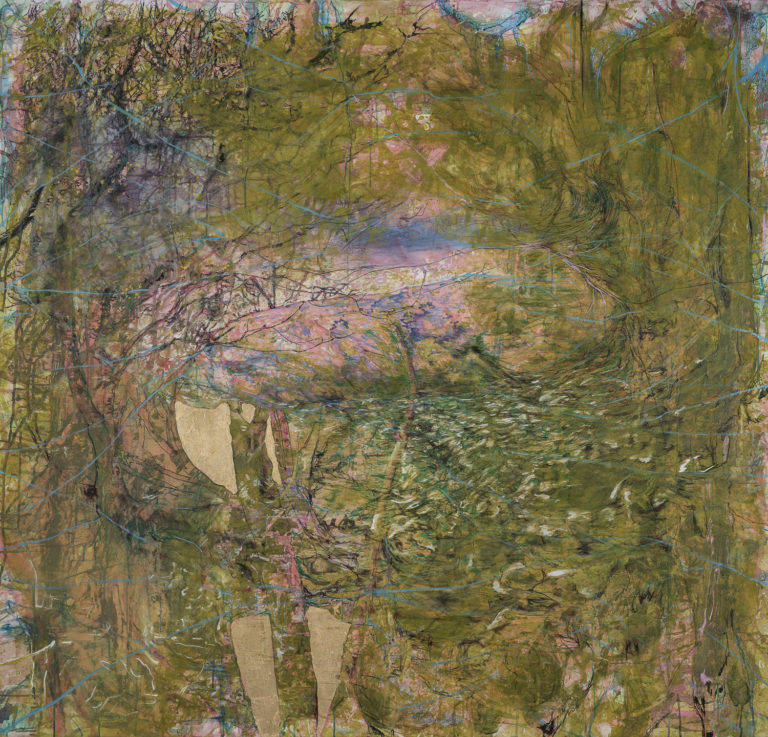 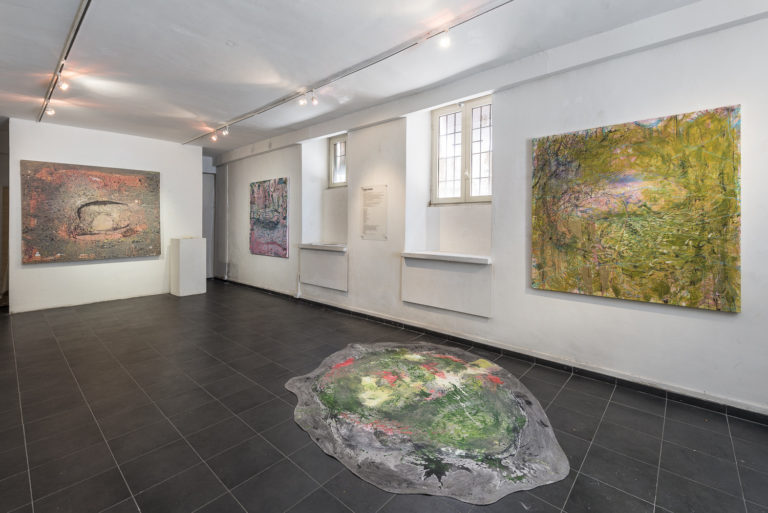 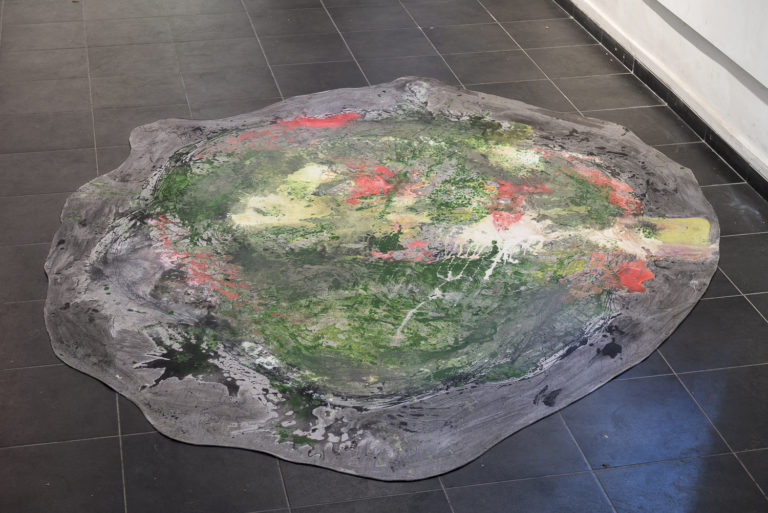 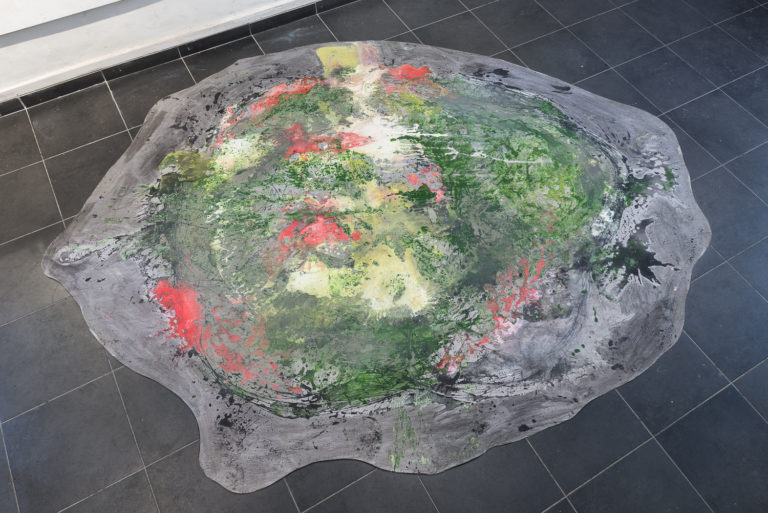 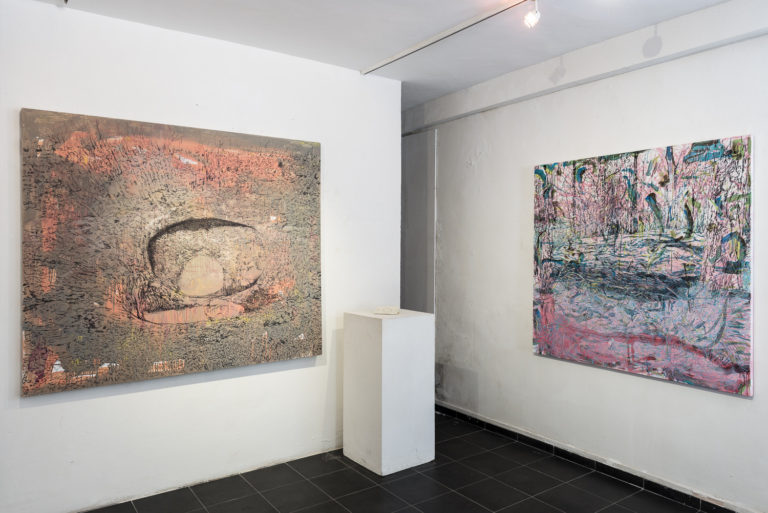 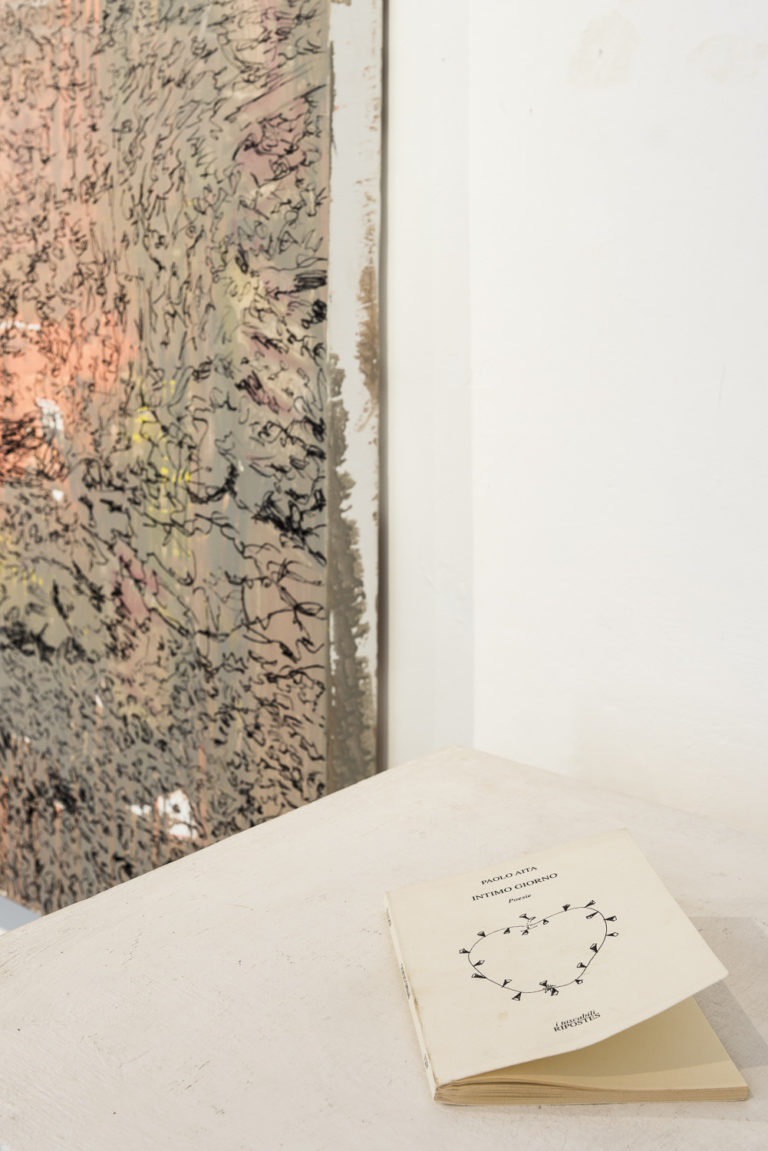 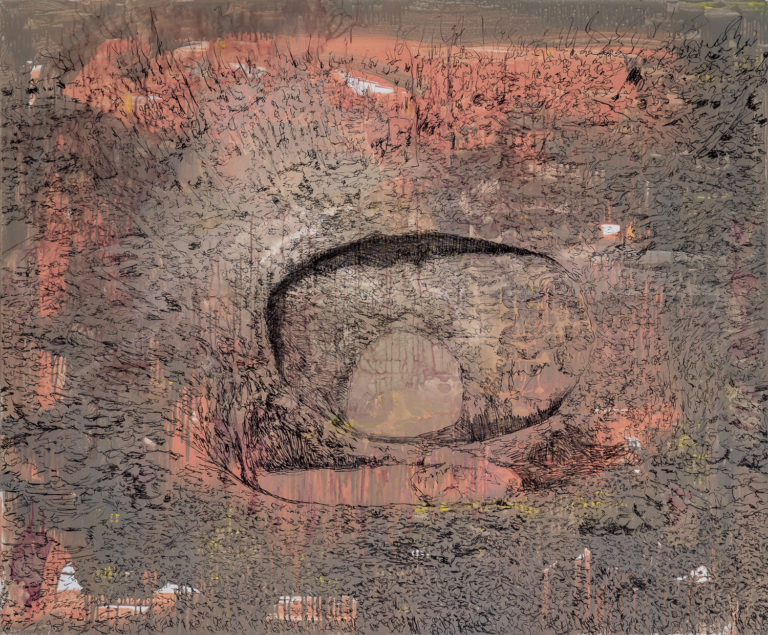 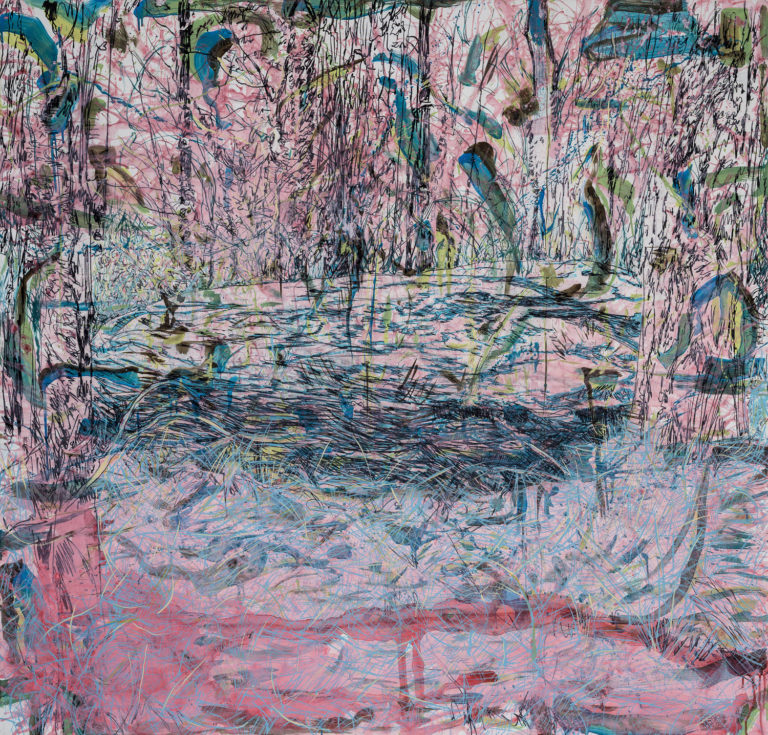 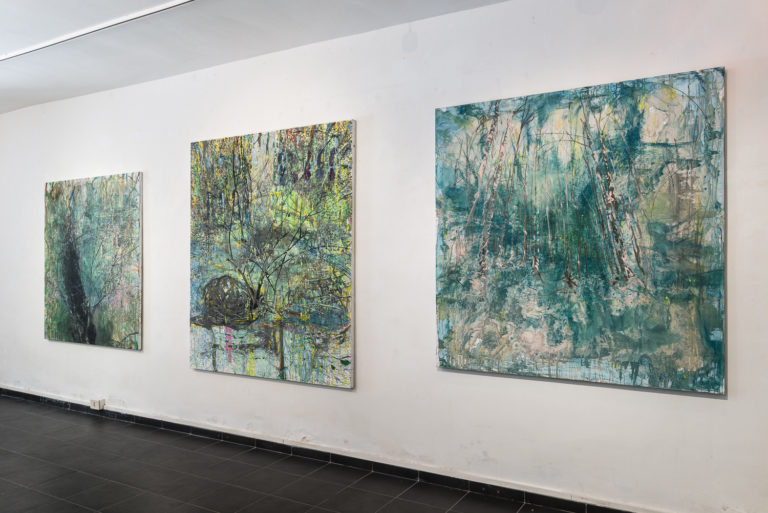 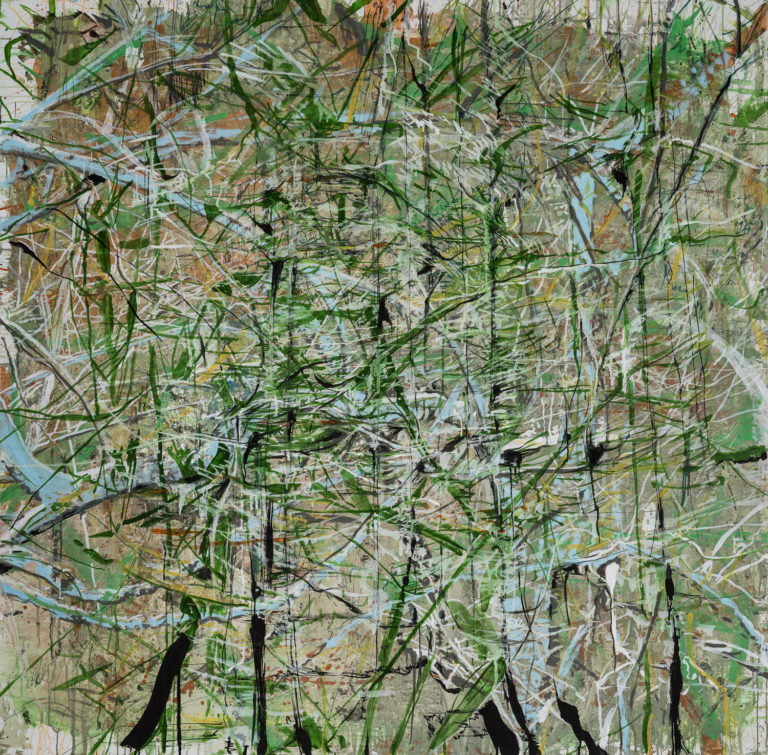 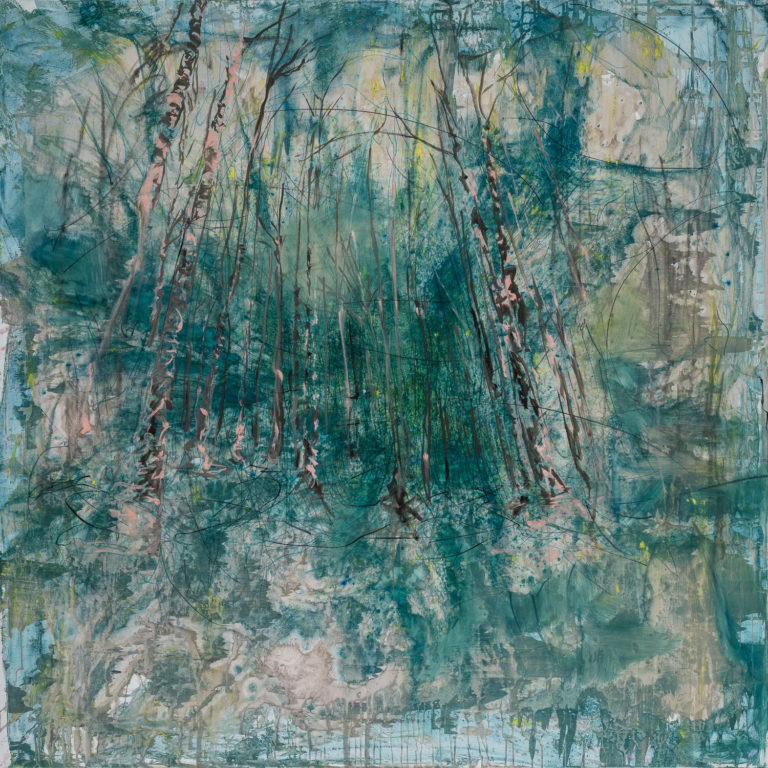 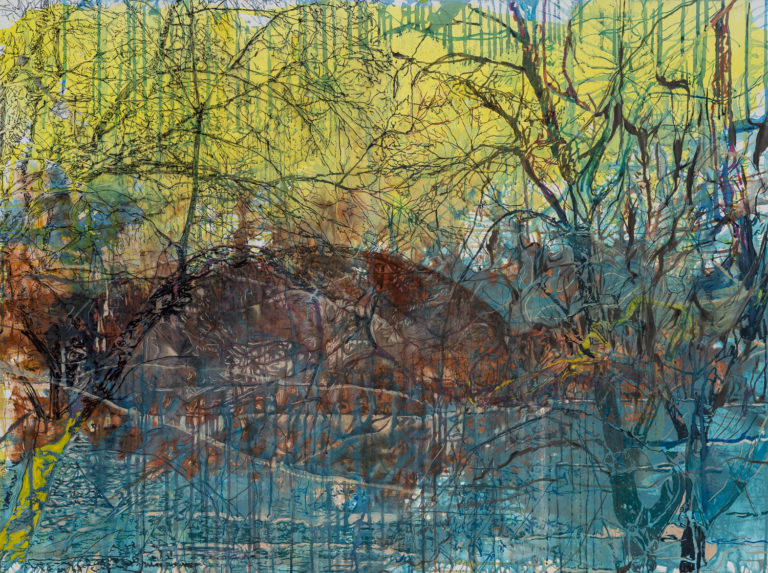 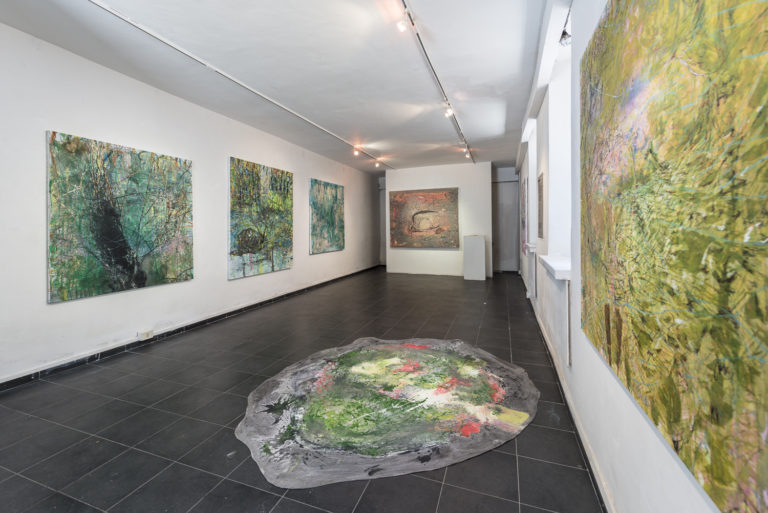