The project was created and developed by Piotr Hanzelewicz and Nicola Rotiroti, during the first stages of the Santiago journey.
The Authors undertook the ancient journey on foot, following the rhythm of their steps and their breathing, reflecting on the concept of smell, odours and perfumes and the consequent implications. Some of the aspects that emerged following their research will be included in this document in the form of words, suggestions and visual notes.

The idea is a brief and magical narrative that focuses precisely on the invitation we were given (to create a perfume) in a short fairy tale, in the form of a video.

Faced with this challenge, our imagination turned to the exotic, we paraphrasing an old advertisement, we said:
"We could surprise you with special effects, but we are Geraniums!"
We chose simplicity, the common dimension of everyday life, making it extraordinary.
A geranium is the "plant that everyone has, at least once, kept in their garden or on their balcony". (From a blog on the net)
In short, Geraniums are the flowers that "even a child can keep" ... but let's go a step further.

Geraniums thrive in the southern lands, they have multiple uses other than the decorative one, not least, as an essence in perfume making.
They symbolise madness, loyalty and friendship.
Starting from a generic description on the net, we used the structure of the encyclopedic text as a framework, and like a climbing plant, we built our narration upon it.

Some notes about it

The balcony is a dimension of relationships. In a town, the balcony is the nose of the house, jutting out, just like our nose does when we smell.

The wood in which we find ourselves in has a synaesthetic dimension where the vital elements of the perfume live: The Air and the Water, highlighted by light and light-color (reference to the Gothic windows).
The vision of the forest has an idea of "forest of symbols" from "Le Corrispondence" by C. Baudelaire.

Text
The idea was an invitation of Giuseppe Capparelli, he suggested that  Piotr Hanzelewicz and Nicola Rotiroti reflected on the concept of perfume, while walking along the Camino de Santiago. 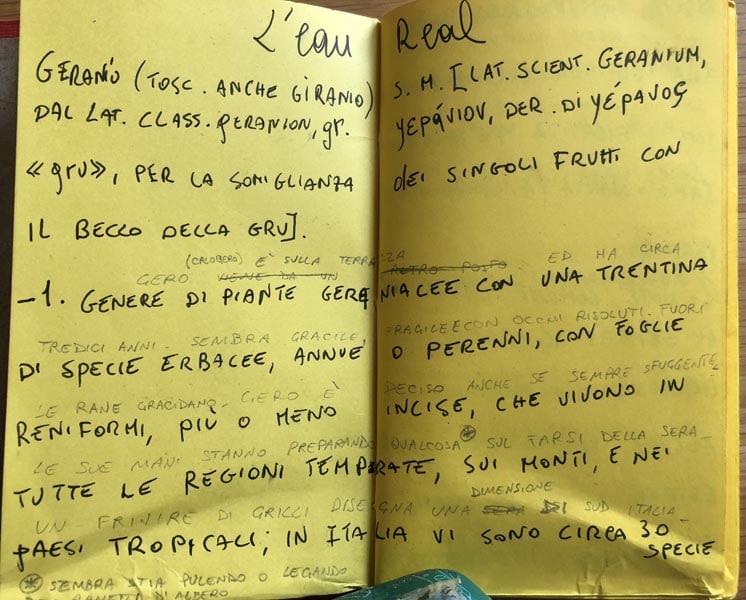 What does it mean to live only through smell

Story of a boy who finds it hard to see his face. 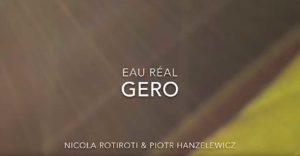 In Puglia water was distributed with trucks and it was sold to farmers to water their vegetable plots. 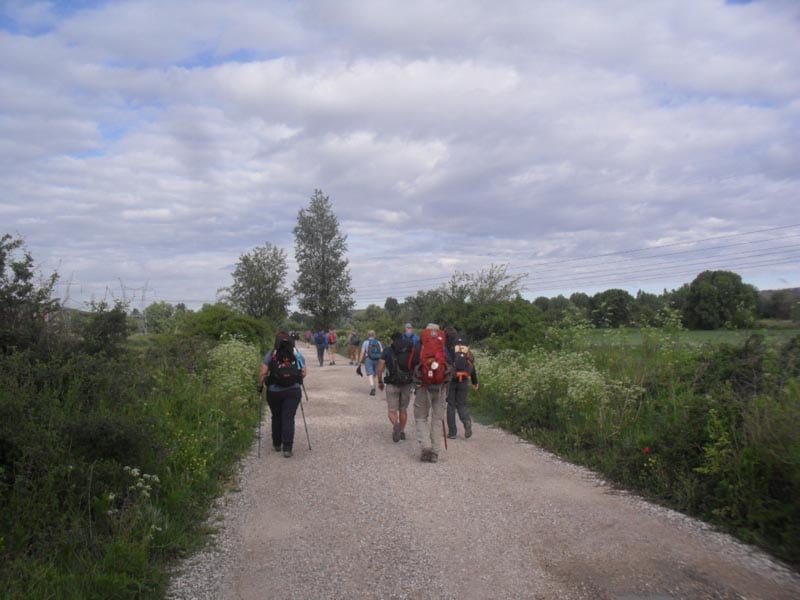 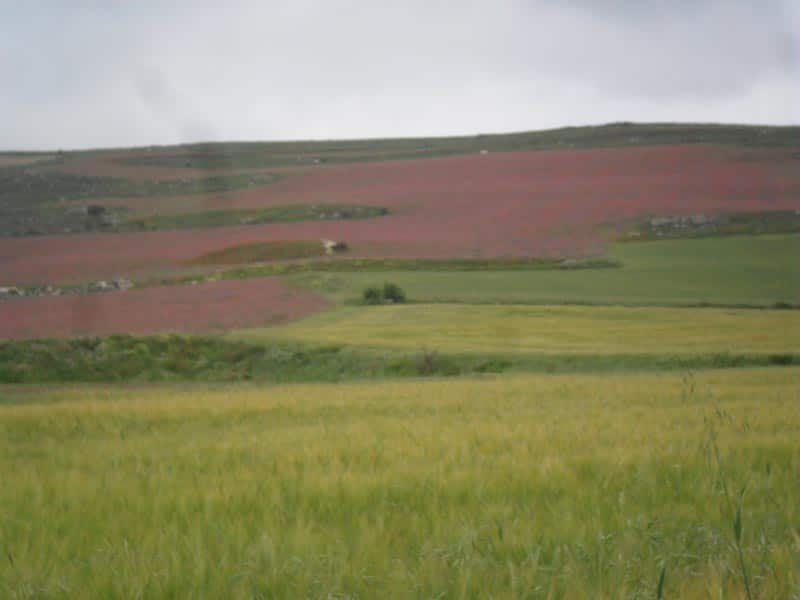 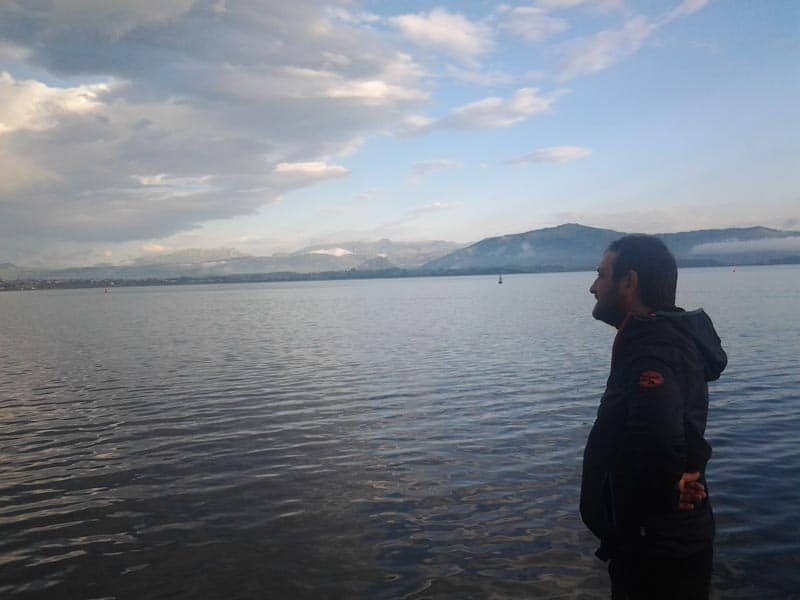 From here we start thinking and imagining a container that can both host the perfume’s ampoule and invite the public to take the container and wear it, thus entering an aseptic dimension where no perfume can exist, and at the same time, hide the wearer from view. After several attempts, we thought about our hands and how we used them when we were children to cover our faces when we didn’t want to be seen or we were hiding ourselves when we cried. Hands that create a shell, that we put our face into. 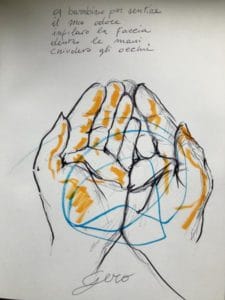 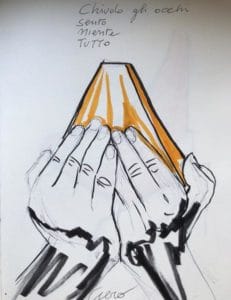 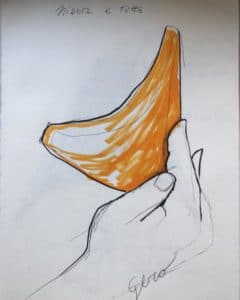 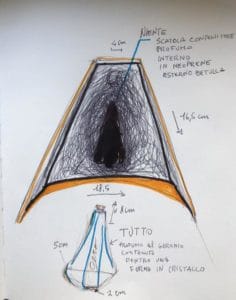 Construction of the container 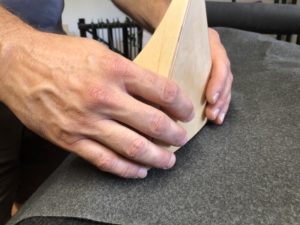 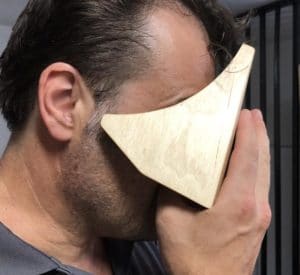 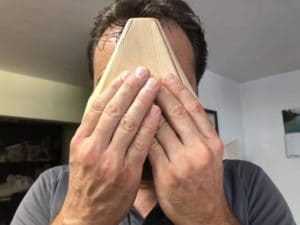 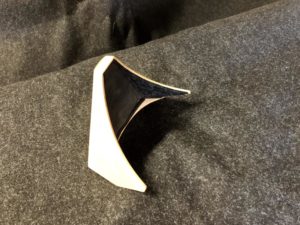 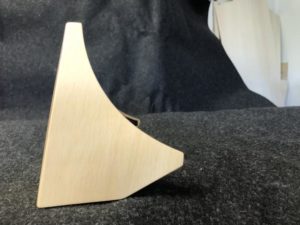 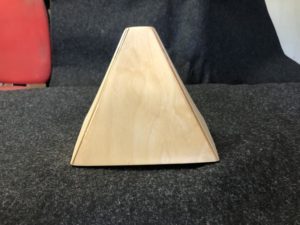 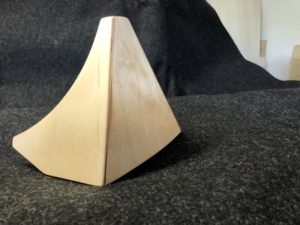 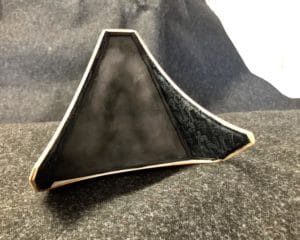 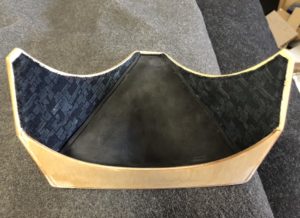 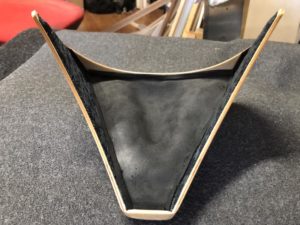 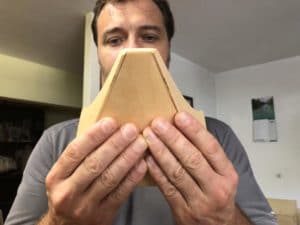 September 2018 arrives and along with Piotr and Valentina I go to Alberobello in Puglia and we bring a video where the sky, the plants, and the grass are breathtaking, and where a whirling, gurgling vertigo leads the eye to get lost in nature and awakens the voice of a child within you who says, “what are you doing? Run away.” In addition to the 380 drawings of noses, realized on four drawing pads brought inside the “Casarossa”, a notorious place – but we only found that out when we it arrived there – in the 40s it had hosted a prison camp for about 200 . We find ourselves in this place, the grandson of a partisan of Czechoslovak origin who died in Birkenau and Piotr, son of the first Polish migration to Italy. Absence, Presence, Ghosts. 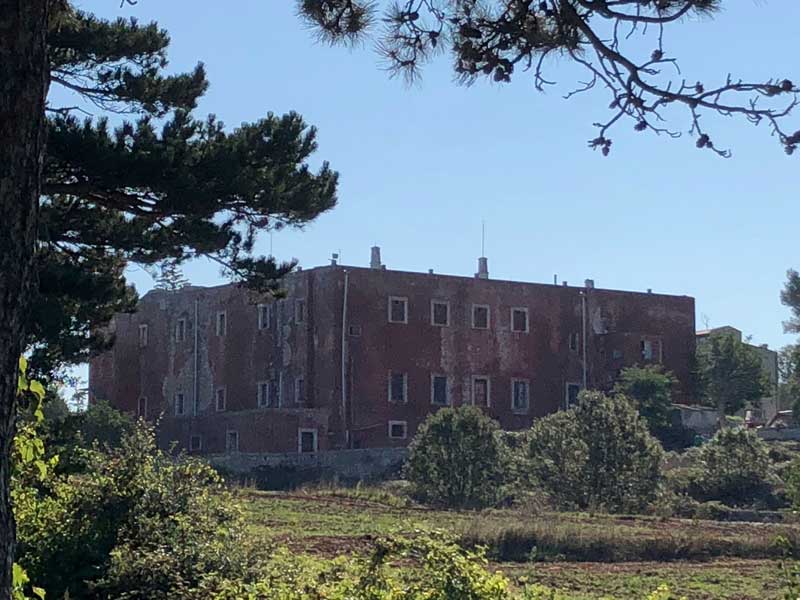 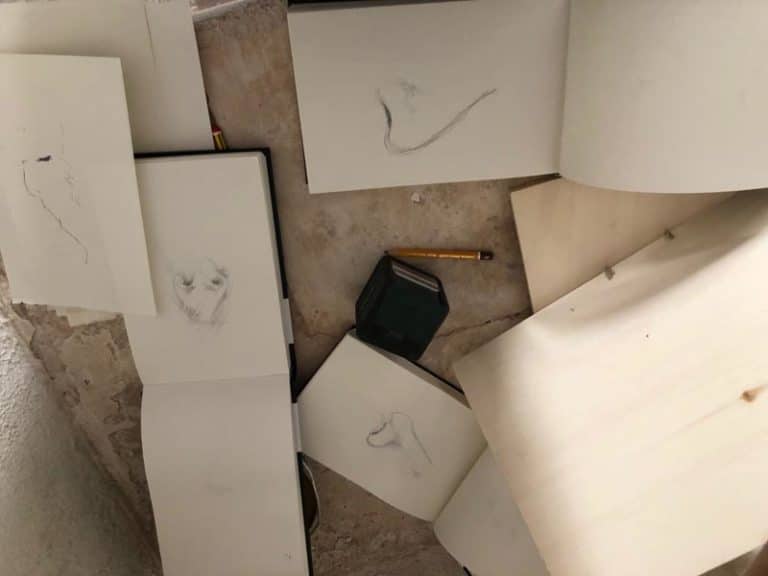 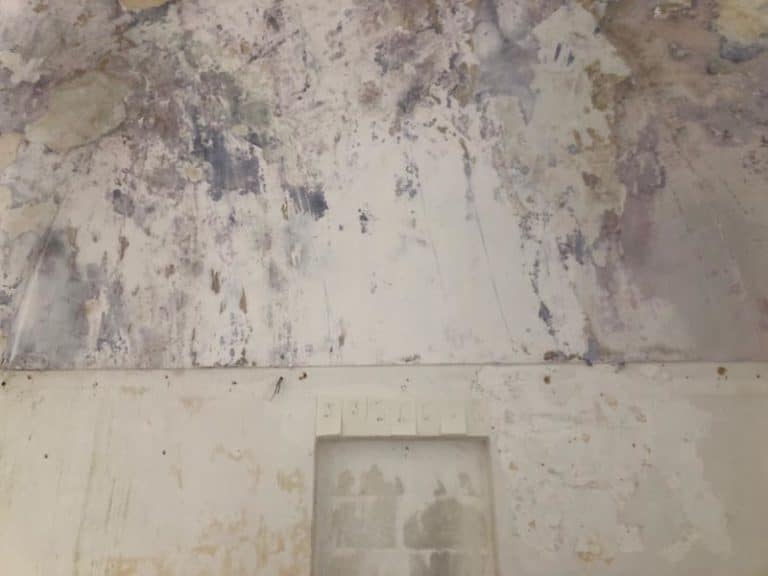 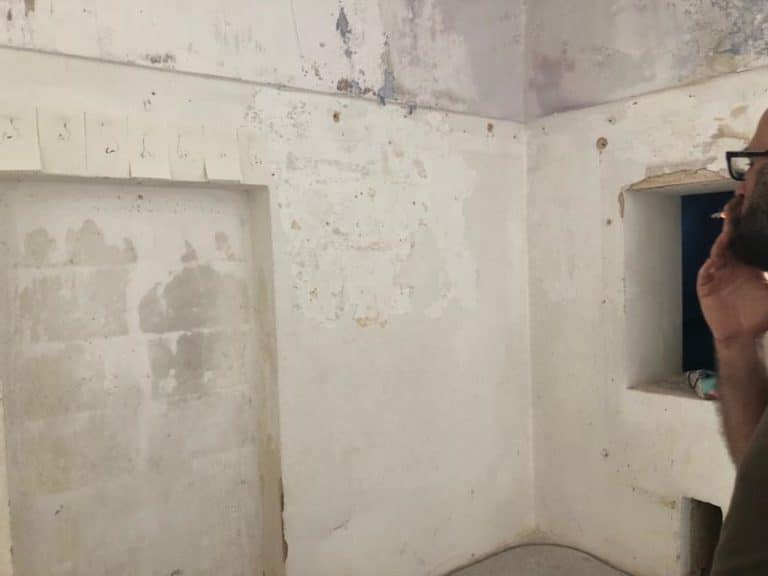 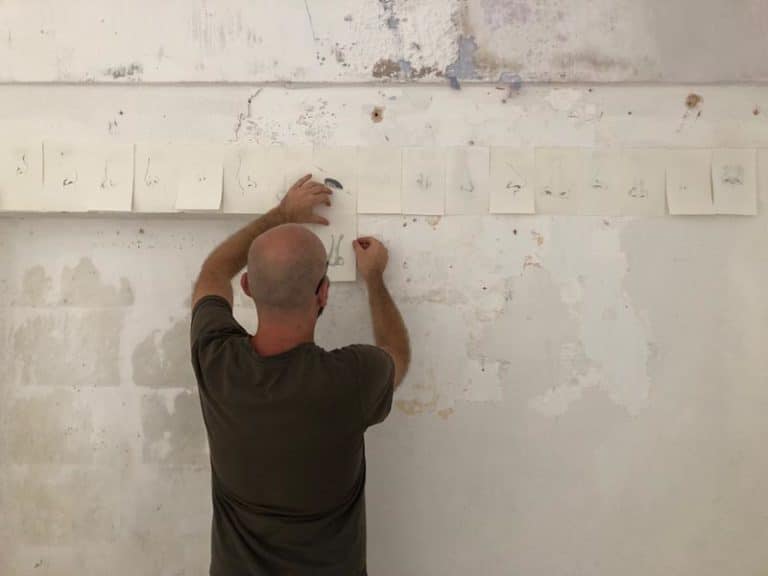 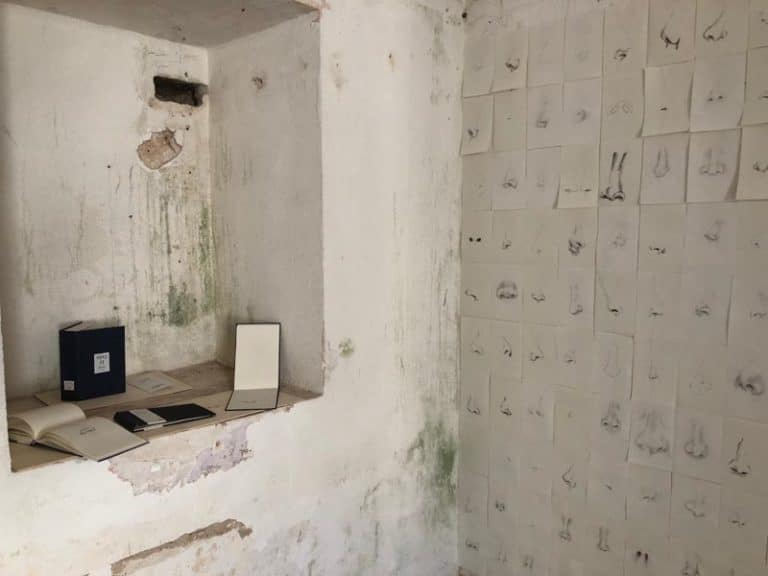 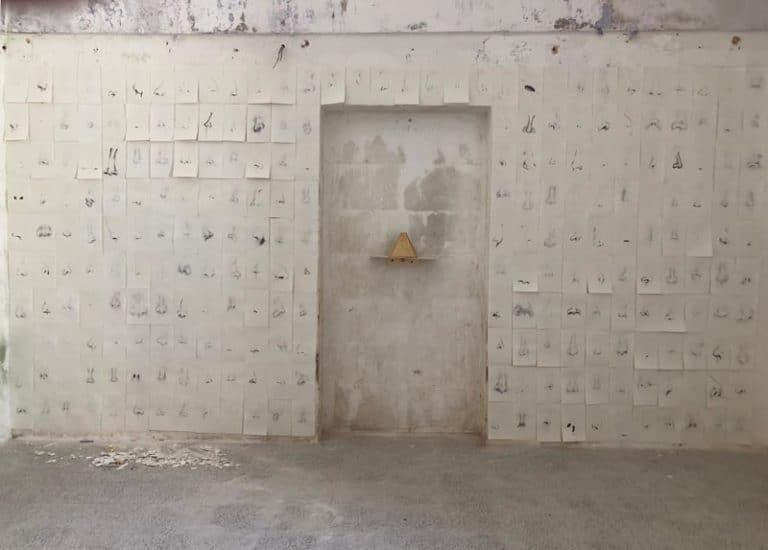 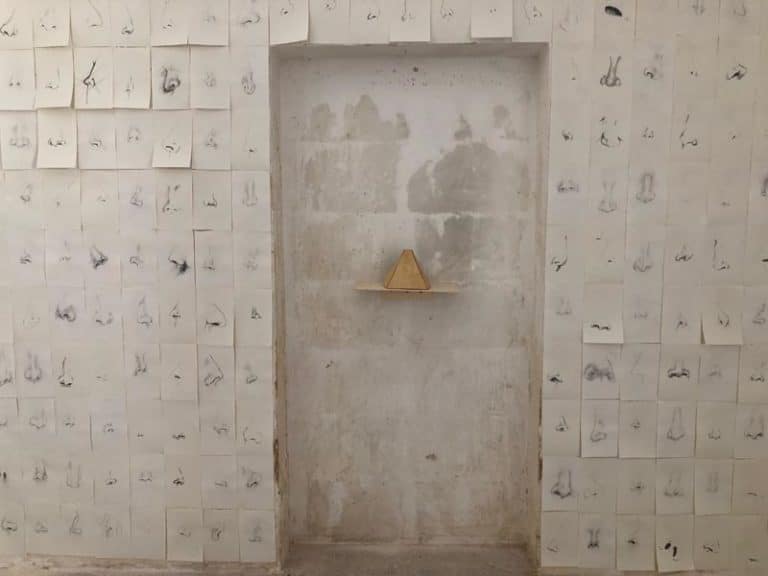 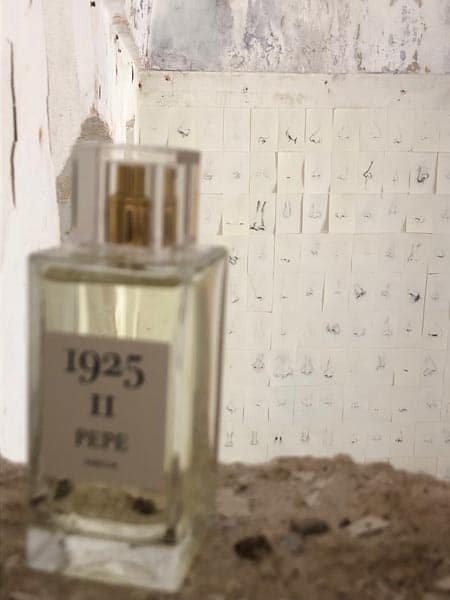